Like nearly all spirits, Demons possess the potential to both harm and to heal. Many practitioners of paths which are not aligned with Demonolatry fail to recognise the benefit in attaining Demonic alliances primarily due to the fact many individuals cannot overcome their biased preconceptions of what they believe Demons to be.

It must be understood that Demons, unlike some other divinities, are less apt to respond to the pleas of an individual without first having in place an agreement which entitles Them to reciprocal service(s) by the individual. Failure to reciprocate on the part of the individual may result in an undesirable outcome—however the same remains true for other non-Demonic entities. It should be stressed that spiritual alliances must, like human alliances, be maintained if the individual wishes to enjoy the benefits without repercussion.

When we discuss the term Demonic medicine, we are referring to the use of Demonic energies for the purpose of healing. When one has established and maintained an alliance and relationship with a particular Demon, he or she may then approach the Demon with the prospect of working with It in order to heal either themselves or another. Some Demons are less likely than others to agree to such a proposition; but, if approached correctly, most Demons are willing to participate.

Demonic energy is extremely potent and if a Demon is eager to aid you, it is wise to first prepare yourself for the reception of this energy. If uncontained, Demonic energy can have a corrosive effect upon the aura. Because of this, it is necessary to either attain the Demonic medicine through Shamanic journey or to request that the Demon enchant a vessel which can then be used as a key to activate the contained energy when it is needed. Taking the Demonic energy directly into oneself must be done within a specially-constructed circle in order to first transform it from its raw state into a consumable one. The circle, within the context of Demonic magick, is not a protective barrier but serves as a something akin to a decompression chamber.

By placing oneself within the circle, the Demonic energy can be slowly introduced into the environment without adversely affecting the human aura. By bringing one’s own auric vibrations into harmony with Demonic vibrations, the energy which is to be transferred is harmonised. Generally, casting the circle will ensure that the energy within is brought to a balance gradually, but the magician can also choose to alter the vibrations of his or her own person through exhibitory energy-raising techniques such as dancing, vigorous sex (especially BDSM sexual techniques), deliberate pain infliction (self-flagellation, etc.) or using substances (excluding depressants such as alcohol). Of course the use of substances within ritual is only advised for those who are mentally stable and magickally competent—I do not personally endorse the use of illegal substances, but if one chooses to use consciousness-altering chemicals he or she should be aware of the dangers involved and should preferably have another person present in case of a negative reaction.

Demonic energy may also be channelled through the body of the practitioner through ritualised possession. In this practice, the Demon is invited into the body of the magician who may then carry out the healing directly. One should be cautioned, however, that only seasoned and disciplined practitioners should attempt this method due to the dangers of inviting external entities into the body without the proper precautionary methods such as those used by experienced mediums.

Within the context of Shamanic journey, one essentially acclimates his or her own energies to the native environment of the Demon—thus negating the need for an external circle or other general preparatory methods. This is not to say that one should ever carelessly attempt to journey into the Demonic realm without understanding the process—the difference between the preparations for journeying and the preparations for ritual invocation are simply different. Journeying to the Demonic realm is the reverse of the Demonic invocation—instead of inviting the Demon into the realm of the practitioner, the practitioner journeys to the Its realm. It is always wise, however, to ensure that you are properly grounded before commencing the absorption of Demonic energy in any state.

Perhaps the simplest method for acquiring useable Demonic medicine is the aforementioned Demonic enchantment of a vessel. The vessel may be a crystal, a pendant or any other object into which the Demon may deposit a certain amount of Its energy. Such vessels are sometimes referred to as fetishes within the context of Core Shamanistic traditions—however I choose to simply use the term vessel as it is culturally non-specific. Preparation of the vessel depends upon the material and the purpose which the energy will serve. Generally speaking, one may simply cleanse and consecrate the vessel in order to prepare it for enchantment—the actual imbuing of the object with Demonic energy is a varied process that will depend upon the Demon with whom you are working.

Most enchantments are carried out within sacred space in ritualised form—the entire process of cleansing, consecrating and enchanting the vessel may be performed within the same ceremony. The Demon whose aid you will be receiving is invited into the sacred space through invocation (never use Ceremonial evocation). As with any other cleansing, any lingering energies within or about the object are neutralised and the consecration may proceed as would be normally observed by the practitioner. It should be noted that consecrating the vessel in the name(s) of the participating Demon(s) is the best approach, although this will depend entirely upon one’s relationship with Them and/or his or her Patron or Matron deity.

One thing worth mentioning is the potential conflict of interest which can sometimes arise when an individual has called upon the aid of numerous spirits or deities for the same purpose. An example of this would be an instance in which I was seeking healing for my grandfather. Several other individuals had called upon the Christian pantheon for aid. Being aware of the fact that some Demons are opposed to working with these entities, I asked Them whether or not They would object to operating alongside Jesus Christ and Yahweh whilst contributing Their aid to the purpose at hand. Whereas the majority of the Demons whose aid I had sought had no objection, several in fact did. Remember, too, that Demons can have conflicts with other Demons. Many individuals assume that because Demons are generally all categorised into the same group They must all “get along” with one another. This is not true. It is always courteous to ask such questions of any spirit in addition to providing it with as many details pertaining to the working as possible.

Concerning enchanted vessels, if you do not specify exactly what it is that you seek from the Demon, It is left to speculate and will simply supply you with only enough energy to conceivably carry out your healing work. This means that if you do not specifically request a permanent enchantment, it is likely that the vessel will only contain enough energy for a single use or a handful of uses. If you wish for the vessel to serve as a “general purpose” healing item, you must be specific in your asking. Although non-corporeal entities are certainly aware of much more than we are, they are not always mind-readers.

Once you have acquired your enchanted vessel, there are many methods for using it. If the vessel is a stone, you can create Demonic elixirs by soaking the stone in water or alcohol (use caution as some stones are toxic or may be damaged by water or alcohol). Other elixirs may be formed without the use of an enchanted vessel. Vessels may also be used by placing them upon the affected area(s) of the body or by using them in sachets which may then be placed by the bedside or beneath the pillow.

Demonic medicine can also be harnessed in simpler ways. For example, using candles inscribed with the sigil or seal of a particular Demon may be burned within healing rites. Simple talismans may be constructed using Demonic sigils. Invocation bowls, small bowls which have been decorated with Demonic figures and which contain an invocatory phrase, may also be created and used in a similar fashion as is the witch’s cauldron. Demonic sigils may also be used as altar patens upon which flowers, stones, herbs and any other ingredients in addition to perhaps a photograph of the individual in need of healing may be placed.

In some cases, the sigil or seal of the Demon whose aid you wish to employ may be drawn upon parchment and burned. The ashes may then be mixed with liquid and ingested. In addition to only using the ashes, one may create an alchemical tincture by fermenting corresponding plant matter with the ashes in liquid, skimming away the residue and bottling the liquid. Additionally a similar but weaker elixir may be created by simply placing a clear glass of fluid atop the seal or sigil of a particular Demon. This method can be especially useful if you are running short on time and are in need of an elixir but cannot spare the time needed to create the more complex medicinal products. This method for creating a Demonic elixir may be expanded for a slightly more powerful product by placing the glass of liquid atop the seal or the sigil and leaving it outdoors during a full moon (or during midday if the Demon is Solar in nature). One may go a step further and charge the elixir during the ideal planetary hour or astrological state which corresponds to the rulership of the Demon in question. 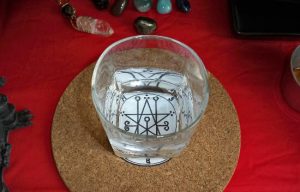 Demonic medicine may also be attained through the use of oils, known as oleums within some Demonolatry traditions. These oils may be created in the same manner as any other anointing oil—a base or carrier oil should be chosen (it should be noted that in my experience, Demons are not as fussed about whether or not a particular oil is “natural”, plant-based, etc.—I have used mineral oil as a carrier with no issues) and the corresponding essential oils of any herbs which are specific to the Demon in question. The oils should be consecrated in the name(s) of the Demon(s) whose aid is being sought.

When a Demon has agreed to aid you by gifting you with Its medicine, it is courteous to provide the Demon with a suitable offering. Because Demons are, in many ways, more similar in nature to human beings than some other entities, They are often pleased with offerings that reflect the human experience. Whereas some entities may prefer offerings of flowers, crystals and other natural objects, Demons tend to prefer offerings which have either been created by or are indicative of Mankind. Demons have been known to enjoy offerings of:

Otherwise Demons are certainly not shy about informing you as to Their preference of offering. If you are uncertain as to what a particular Demon may enjoy, you need only ask. Sometimes clues as to Their preferences may be found by examining Their correspondences and natures, but They often indicate very clearly what it is that you may do for Them that will be most satisfactory. Besides meditating or journeying for the answer, Demons are also capable of expressing Themselves through either direct “thought implantation” or through other methods such as dreams or divination. I sometimes use a pendulum when asking for clarification pertaining to a particular Demon’s preference for a variety of items.

13 thoughts on “Demonic Medicine: An Introduction”